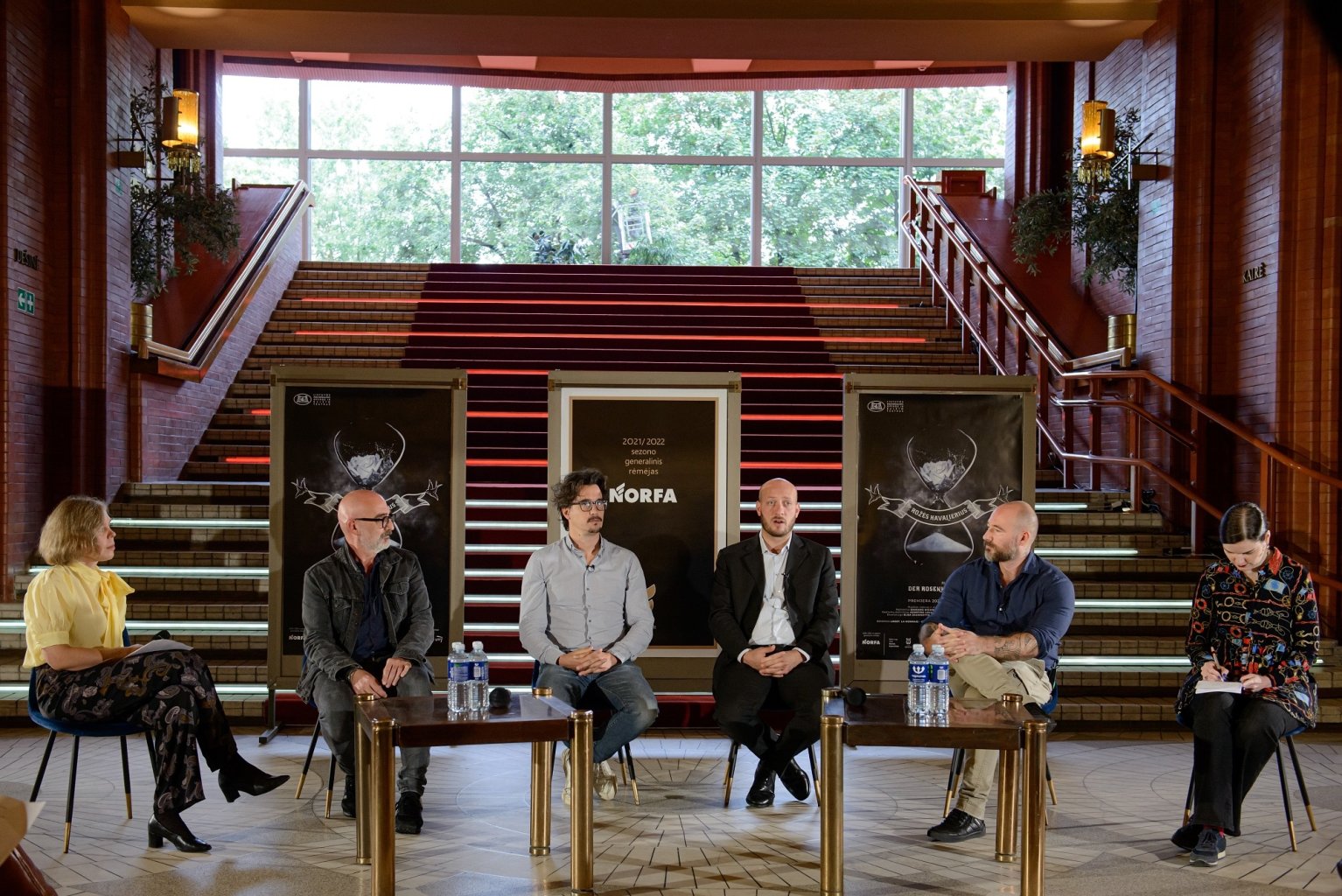 During the recent press conference, Lithuanian National Opera and Ballet Theatre presented not only its upcoming ambitious premiere, but also the main sponsor of the new theatre season – the Norfa group of companies.

"We are starting our third season together with LNOBT. I want to contribute to the culture, to the movement of the Lithuanian people forward. I wish everyone a peaceful season, so that the audiences can visit the theatre at all times,” – said Dainius Dundulis, Chairman of the Board of Norfa.

LNOBT‘s general manager Jonas Sakalauskas was pleased that such a big business supports the theatre, and at the same time sets an example for other sponsors: “Successful business can make a significant contribution to fostering culture. I hope this season will be a success for both business and people who work in the field of culture. Hopefully, we will all be able to return to our normal jobs and enjoy a normal life.”

International Premiere - an Honor for the National Theatre

Sesto Quatrini, LNOBT‘s artistic director of opera, was pleased that the theatre‘s symphony orchestra successfully competed with the extraordinarily complex score of “Der Rosenkavalier”: “This was due to the purposeful work of all the leaders of the orchestra, thanks to which we achieved that musicians looking for a job in the theatre orchestra are calling us almost every day from both Lithuania and abroad. Due to the circumstances of the global pandemic, the first premiere of the international co-production of “Der Rosenkavalier” will take place in Vilnius, and not at the La Monnaie - De Munt Theatre in Brussels, as previously planned. This is an honour for our theatre, because we could invite the creative team of “Der Rosenkavalier” from Italy to Vilnius. They are not only wonderful artists, but also great teachers, and we are lucky enough to work with them. We can boldly write the name of director Damian Michieletto next to the most famous directors who worked at the LNOBT, such as Graham Vick or Robert Wilson," – said S. Quatrini, the music director and conductor of the premiere.

Michieletto himself admitted that he came to Vilnius for the first time only thanks to the "Der Rosenkavalier": "I’m convinced that a national theatre is the reflection of the whole country. No matter in which city the premiere takes place, my goal remains the same: to present the highest quality work to the audience, because the audience that buys tickets everywhere expects it. And this requires mobilizing the energy of all people working in the team, so that the "machine" of the theatre can work harmoniously. I see this production as an opportunity to take your well-functioning theatre to a new level, to push it towards the European context. When we speak about "Der Rosenkavalier", we should not forget that it is a comedy: the comic, game-like aspect is very prominent here," – said the Italian director.

The Beauty of Opera that Moves the Soul

Marschallin’s phrase about the fact that she is looking for last year's snow has become the ideological key of "Der Rosenkavalier": the snow is the main symbol of the production, depicting our temporary and rapidly passing youth. Set designer Paolo Fantinas said that he got his ideas from the characters of the opera: “The scenery of this production required a lot of work: it is good that we were able to reign on stage all month and arrange everything in the way we needed. One of the things we wanted to demonstrate was the state of weightlessness that people in love experience every time. We used a lot of floating balloons for that – you will see how this will be done during the premiere,” – said the set designer.

Lighting designer Alessandro Carletti is convinced that lighting is the "emotional glue" of the production, which can unite everything that happens on stage and convey the necessary emotion of the character: "Of course, we must not overdo it, because we need to leave room for the genius music by Richard Strauss: its beauty in this opera often moves the soul,” – says A. Carletti.